Welcome to the Chocolatey Community Package Repository! The packages found in this section of the site are provided, maintained, and moderated by the community.

Every version of each package undergoes a rigorous moderation process before it goes live that typically includes:

More detail at Security and Moderation.

If you are an organization using Chocolatey, we want your experience to be fully reliable. Due to the nature of this publicly offered repository, reliability cannot be guaranteed. Packages offered here are subject to distribution rights, which means they may need to reach out further to the internet to the official locations to download files at runtime.

Fortunately, distribution rights do not apply for internal use. With any edition of Chocolatey (including the free open source edition), you can host your own packages and cache or internalize existing community packages.

Your use of the packages on this site means you understand they are not supported or guaranteed in any way. Learn more...

To edit the metadata for a package, please upload an updated version of the package.

Chocolatey's Community Package Repository currently does not allow updating package metadata on the website. This helps ensure that the package itself (and the source used to build the package) remains the one true source of package metadata.

This does require that you increment the package version.

All Checks are Passing

To install Logisim Evolution, run the following command from the command line or from PowerShell:

To upgrade Logisim Evolution, run the following command from the command line or from PowerShell:

To uninstall Logisim Evolution, run the following command from the command line or from PowerShell:

NOTE: This applies to both open source and commercial editions of Chocolatey.

1. Ensure you are set for organizational deployment

(this should look similar to https://chocolatey.org/api/v2)

See options you can pass to upgrade.

Add this to a PowerShell script or use a Batch script with tools and in places where you are calling directly to Chocolatey. If you are integrating, keep in mind enhanced exit codes.

If you do use a PowerShell script, use the following to ensure bad exit codes are shown as failures:

Logisim is an educational tool for designing and simulating digital logic circuits.
It has been originally created by Dr. Carl Burch and actively developed until 2011.
After this date the author focused on other projects, and recently the development has been officially stopped (see his message here).

The project is currently maintained by the REDS Institute, which is part of the Haute École d'Ingénierie et de Gestion du Canton de Vaud, Yverdon-les-Bains, Switzerland.

We have decided to release this new Logisim version under the name logisim-evolution, to highlight the large number of changes that occurred in these years, and we actively seek the contribution of the community.

As logisim-evolution needs updates (new features and patches) and currently lacks unit tests, the testing branch was created.
The goal of this branch is to add new features/patches without affecting the release on branch master.
Users who are willing test new features should checkout the testing branch. The feedback from users is really appreciated as it makes logisim-evolution better. Feel free to use the issue tab to report bugs and suggest features.

Then every semester, the testing branch will be merged in the master for a new release.

Here you can find a tutorial (French version here) that explains some basic usage of Logisim. The electronic card referenced in the tutorial is a small card we use in our laboratories -- you won't be able to buy it in a store -- but the descriptions should be good enough to be used for another generic board.

Another good reference is this book, where basic electronics is explained with the help of Logisim.

Logisim-evolution uses gradle for project management which means it can be easily imported into most modern IDEs.

Instructions on how to import a gradle project into Eclipse can be found here.

Instructions on how to import a gradle project into IntelliJ IDEA can be found here under "Importing a project from a Gradle model" title. 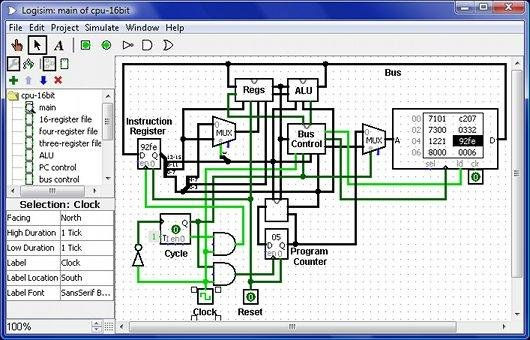 This package has no dependencies.

Discussion for the Logisim Evolution Package

chocolatey.org uses cookies to enhance the user experience of the site.